There is a brief validation report by Poulain for Joan Riudavets born in Menorca in 1889, which provides at least some of the details we require [29]. We are not told what suitable birth records were available, but there is a comprehensive list of parents, siblings and children.

Among these, the only potential identity switch opportunity is between Joan and his half-brother Jaime who was five years younger. Jaime’s death was recorded in 1915 when Joan was 25. We cannot rule out the sibling switch at that time. We are told that Joan was head of a local youth group in 1912. If we knew that this continued until his marriage in 1917 we could be more certain that a switch was not possible. A DNA test of living relatives might also be able to rule out the sibling swap because they had different mothers.

The validator interviewed Joan himself and his younger daughter. She was not alive at the critical moment when a switch could have taken place but could have useful information. The validation does not explicitly mention the possible switch so we are not given sufficient information to determine the case with confidence, but we accept that a basic level of validation was recorded on the reasonable assumption that birth records were obtained by the validators.

Riudavets as a child (left) with his father and younger brother

Riudavets (middle) with brothers Jose (left) and Pedro (right) circa 1975 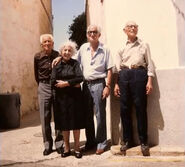 Riudavets (right) with siblings Pedro, Catalina, and Jose (left to right) circa 1980

Riudavets riding a bike at age 111 in 2001
Community content is available under CC-BY-SA unless otherwise noted.
Advertisement